As a New Year’s resolution, I decided to invest in a new hobby: Drones.
In particular, the Arducopter Hexa, by 3DRobotics!

Well… I also do research on the use of drones for automatic inspection… Nonetheless, in between observability proofs, filter/controller design, Matlab simulations, and writing papers, I really don’t get that much “hands-on happiness” as I’d like to have! When we have a very expensive drone equipped with thousands of Euros in payload (lasers, cameras, embedded computers, and so on), only professional pilots (unlike me) should handle them! 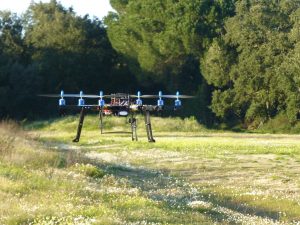 I bought the Arducopter Hexa B, with uBlox LEA6 GPS, telemetry, and sonar. During the weekends, I started with the basic Attitude mode, with some hover and basic flight maneuvers. As I gained more confidence in my abilities as a pilot and on the behavior of the vehicle, I started exploring the Altitude Hold and GPS modes, which despite the very noisy sonar data (checked in the logs) worked very smoothly. I eventually started exploring the return-to-launch (RTL) mode, and finally, my goal, the Auto mode where we define our mission in the Mission Planner and the Arducopter executes it when we switch to Auto mode during flight.

At some point DIYDrones.com put in place the T3 Cube Challenge:
“The mission is simple, get airborne climb to 20m.
Fly a cube with 50m sides, pausing for one minute at each corner, so your flight time cannot be anything less than 8 minutes….. Bonus points if you can stay longer at each corner….
The neatest cube KML wins.”
This was the extra push I was needing to get deep into mission planning!

After four missions, three of which were cube trials, I managed to draw something similar to a cube in the skies of Portugal. The drone remained aloft for 13 minutes, spending around 25 s in each corner, but going through some edges twice, to ensure all edges of the cube were visible in the final trajectory.
The image below shows the result of the mission log with which I entered the T3 Cube challenge! 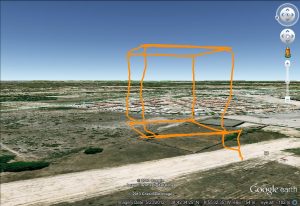 Not bad from my perspective, but there were more accurate cubes and far more longer flights, which got the top three places and prizes. There were eight people from around the world participating in this challenge and, just for entering this challenge, the kind organizers offered me a t-shirt! 😀

The KMZ file can be found here.